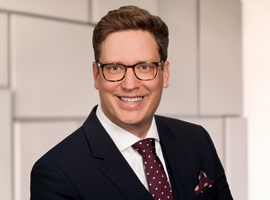 Nicolas Hummel has been a lawyer and partner at GRUB BRUGGER's Stuttgart location since 2018.

Mr. Hummel's main focus is on individual and collective employment law, in particular at the interface to insolvency law. He advises and represents companies and insolvency administrators in labour law due diligence, in connection with company acquisitions or in sales and company restructuring. He also supports companies in drawing up and negotiating employment contracts, collective tariff agreements and company agreements.

Mr. Hummel represents the interests of works council bodies vis-à-vis employers in negotiations, arbitration proceedings and court decisions. He is also available at all times for works council committees in the context of the day-to-day management of the company.

Conducting legal disputes before the labour courts at all levels, in particular in employment protection proceedings, also forms part of his duties: He also advises and represents managing directors, board members and other executives.

Another of Mr. Hummel's special interests is the German Temporary Employment Act (AÜG), as well as the legal questions that arise in connection with bogus self-employment and corporate data protection.

Besides this, Mr. Hummel also competently advises on all aspects of Swedish labour law and in particular supports German companies who are active on the Swedish market. Mr. Hummel is also happy to represent Swedish companies in need of support in connection with German employment law.

He has been active as a lecturer for employment law at the Stuttgart Technology University of Applied Sciences since 2015. Furthermore, Mr. Hummel has been a lecturer in German Civil Law at the University of Stockholm for many years and regularly lectures on German collective labour law at the University of Lund. Apart from his teaching duties, he is a sought-after lecturer for presentations and training courses with entrepreneurs and works councils on a variety of aspects of labour law and data protection.